Recently found is this amusing number in three colours, bearing the label OTTO LUCAS.   It would have been splendid to put over one of those towering ‘beehive’ hairstyles of the period.

It is made of very fine straw-plait, coiled and stitched into shape.

This is the second Otto Lucas hat in the collection…the other one, shown below, has been in our keeping for over thirty years.

This one is ‘breton’ shaped, in chunky  black straw, trimmed with a black and white striped organza ribbon folded around the edge of the upturned brim, with a bow of the same tucked in at the back.

OTTO LUCAS was born in Germany in 1903. He moved to London, where he established a flourishing business as a hat wholesaler in the mid 1930’s.   He was not actually a designer himself, but had an eye for what would sell,and brought designers over from Paris to work for him; ruling them, it is said, ‘with a rod of iron’.   Some of his famous clients included the Duchess of Windsor and Greta Garbo.

He approached the large American buyers, wooing them with fine wining and dining, and achieved huge sales in the United States and Australia, becoming a millionaire in the process.

He was returning from a buying trip in Belgium in October 1971 by air. The plane crashed, tragically killing all on board.

For anyone interested in the history of the famous designers, I commend the publication ‘The Century of Hats’ by Susie Hopkins,  published in 1999 by Aurum Press.   It is from this book that I took  some of my potted history of Otto Lucas.

A new addition to the Collection is a third Otto Lucas example.     This is made of a soft, 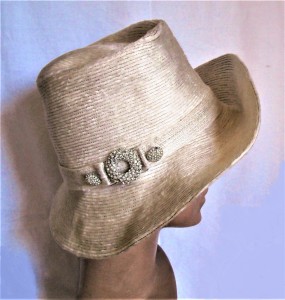 off-white long pile fabric/felt,  which I think is called melusine.   It has been closely stitched all over with a fine silver metallic thread in very close parallel lines known as trapunto stitching.   The effect is quite discreet,just giving the hat a silvery sheen, seen through the furryness of the pile.   There is a self fabric band, and some diamante’ decoration at the side.    It is quite difficult to decide on a style for this hat, as it is soft and floppy, and can be worn in many ways by folding the crown down more, or creasing it , trilby fashion, or turning the brim to different angles.   It probably dates from around the mid 1980’s.