FELT is reputed to be the oldest textile in the world.   Like so many things, it was probably discovered by accident, when it was found that wool and other types of animal hair matted themselves together when subjected to heat, moisture and friction.

Felt is believed to have come originally from Central Asia, where nomadic tribes used it, and still do today,to make tents, clothing and footwear.

This picture shows a modern but traditional felted hat from Khurgizstan, of thick white felt with blue embroidery.

Felt objects have been found among Roman remains in Britain, so the material has been in use here for a very long time.   The use of it for making hats is well documented, as distinct Craft Associations by one name or another stretch back to 1180.   A fascinating history has been written about the Worshipful Company of Feltmakers.   Published in 2004 by Phillimore & Co. Ltd. , its author Rosemary Weinstein has researched the subject in great depth, and gives an insight into the huge numbers of hat styles for which felt was used.

As you will have gathered from my opening blog, we do not really wear hats as part of everyday dress any more.   This has led to an almost total collapse of the hatting industry, and towns reliant on it, like Stockport, have seen their manufacturing  industry disappear.   Fortunately, in their case, the historical side of the trade has been saved for posterity in the form of the HATWORKS museum, right in the centre of the town, near the Station.   This gives an amazing and fascinating insight into the felt trade, with its attendant dangers, using as it did heat, machinery and noxious chemicals.

From the felt manufactured there and in places worldwide, come the instantly recognisable shapes we know : bowlers, top hats, trilbies, homburgs,berets, stetsons, fedoras and caps…as well as innumerable felted and dyed shapes which were pulled, stretched, shrunk and generally pummelled into an astonishing range of fashionable shapes for eager ladies to buy.    This blue pull-on-cum stetson dates from around 1980, while the tan felt is much earlier. 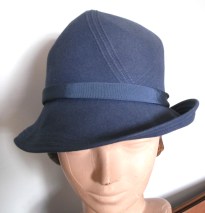 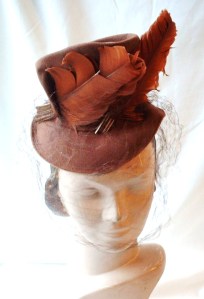 Go to Felt Hats 1…the Bowler;  and following shortly,