This is a traditional sunbonnet.   It is made of woven-striped cotton fabric, and in this instance, is entirely hand stitched.   Others in the collection are sewn by machine; either single thread, using a chain stitch, or twin thread stitches.  Many are made using a combination of hand and machine work.

The techniques used to create the fancy ruffles and frills are really very simple, and consist of only three methods.   The majority of the bonnets have a stiffened front, with rows of ruching and frills across the crown, a gathered back, frequently adorned with an added self-fabric bow and a long ‘curtain’ attached all around the lower edge.   This is known as a bavolet and is designed to keep the sun from striking the wearer’s neck.   The bonnet is finished with long ties, or ‘strings’ of the same fabric.

In all our years of collecting, I have been able to find very little about the history and dates of use of these and similar work bonnets.   It is believed that ones made in white fabric were made for ‘Sunday Best’…   a term which has almost disappeared in my lifetime, as it applied to what one wore for churchgoing on a Sunday….and so few people do so nowadays.   It must be remembered that it was expected of everyone in days gone by.   There seems to be no particular date that these practical headcoverings came into being, although I am of the opinion that it would have been around the 1850’s..(possibly earlier) , and continued up to the 1920’s.

This image shows one from Gertrude Jekyll’s book, ‘Old West Surrey’, published in 1904, and her description of the construction of the bonnet is the only one I have so far been able to find.   She also says that the Sunday Best  worn by the cottagers was made of black satin, ruffled in the manner of the sunbonnet,and treated with the greatest care.   It frequently lasted almost a lifetime.

So;  was the story of white being for ‘Sunday Best’ from another part of the country; and is this style of headcovering known in Scotland, Wales and Ireland; or only in England ?   Does anyone have any family photographs showing the wearing of these bonnets….where and when would be fascinating.   I have a photo taken on a Norfolk beach in 1921 showing a group of women…and one of them is wearing her sunbonnet.   I suspect it was quite an old fashioned (though very practical) garment by then, although the lady in question looks to be relatively young; certainly not someone’s grandma !

There are also other country-style bonnets,related to the sunbonnets.   I call them ‘work bonnets’, and they were probably worn by dairymaids and other indoor/outdoor workers.

This one, though not looking particularly exciting, is very precious because of its condition.   WHY ?   Because it embodies the whole ethos of the collection…History on Your Head.  What has happened to all the headgear shown in countless photographs ?   It became unfashionable, or, as in the example shown above, simply wore out.   This one’s fabric has worn so thin and fragile from constant use, that it is only one step away from being demoted to a floorcloth.   That it has survived makes it all the more interesting.  ( Everyday wear had no value, and most of it has simply disappeared, making those few items still in existence all the more interesting .)

It is constructed in very much the same way as the sunbonnets shown earlier; using the same techniques, but the amount of fabric used is much sparser, and there is less cording and frilling.   It is machine sewn, using the single thread chain-stitch machine which was invented at about the same time as the twin thread version, both of them around the 1850’s.   The latter proved the better system, and chain stitch machines gradually fell out of use.   (For those of you of ‘a certain age’; remember the beginning of video machines which made it possible for the first time to record TV programmes for later viewing?   There were two systems , VHS and Betamax.   Who now has heard of Betamax?   The sewing machine race was of similar proportions)

I once made a hand sewn sample showing the simple techniques which give the delightfully fancy corded, frilled and ruched effects.   It was much more difficult than expected to keep the lines of stitching completely parallel and the stitches small and even.   My respect for those early needlewomen is immense.  The sample works as a teaching aid when giving talks about History on Your Head, as the audience can handle it and pull up the cords to transform it from a flat piece of fabric to one which amazingly ruffles itself up.

There are other forms of bonnet closely related to the sunbonnets: also made of cotton fabric, but much finer weave, and generally plain, whereas most of the sunbonnets are of patterned cloth, be it striped, sprigged or spotted.  They tend to be much more finely worked, particularly down the back, usually having a row of cording forming an upside down horseshoe, with neat rows of vertical corded decoration and no bavolet.   The whole effect is much daintier, and is probably more of a fashion bonnet than a work one.

This example was discovered in a box of junk at one of the early antique fairs in 1987, and looked like a greyish, torn, and floppy rag.   It is machine sewn using twin thread stitches, and when washed, the string used in the stitched channelling, (probably linen) miraculously transformed itself into firm but flexible stiffening.  It has two narrow rows of self fabric frills along the lower edge, and the elaborate back panel mentioned above.   The colour is a delightful palest sugar pink, and I am sure it was once the pride of some young lady…..but it is extremely difficult to know when.

There was also a form of bonnet known as a CALASH giving a much more generous space for elaborate hairstyles, or a small day cap beneath it.   In form and construction it was frequently the same as the ordinary sunbonnet seen in the first two pictures;  but instead of some of the rows of decoration being corded with some sort of cotton or linen string, they have stiff but slightly flexible lengths of cane or whalebone inserted into the channels.    This one has the first four rows filled with cane of approximately equal lengths,then the ones further back diminish in size with each row, with the very back just gatherered

as in the ordinary sunbonnet.   Note how the frills appear fuller towards the back…this is due to the same amount of fabric covering the shorter hoops.   The bavolet and strings are added in the usual way.   The more rigid stiffening made the whole thing into much more of a ‘proper’ hat, but with the added advantage that it would collapse into itself, making it very desirable for easy storage by folding almost flat.    Most of the stiffened ones in the collection are of similar profile, but one is interesting in having an exaggeratedly large set of graded hoops at the front, diminishing to much smaller ones which fit the back of the head closely.

There are earlier ones,popular in the time when ladies wore gigantic towering hairstyles…around 1780.   These were much more likely to have been made of silk, and would have been worn by much grander folk than the cotton ones. 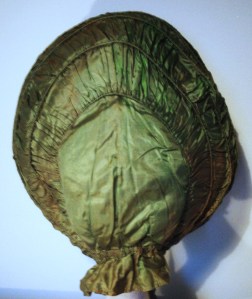 This example is huge, as can be seen from the lower picture, but it has some of the characteristics of the sunbonnet style with its ruching and rudimentary bavolet.   There is one of even larger proportions in the collection at Hereford Museum Resource, which they will show you, together with a wonderful collection of headgear, if you make an appointment to see them.

Another variation, seen in the next picture, is the STAITHES BONNET.   At first sight, it seems to be the same style as the traditional sunbonnet but close inspection shows it to be constructed somewhat differently.   At the front, the rows of corded stiffening are the same, but then, instead of the ruffles being made from the body of the fabric, they are applied in the form of a box-pleated strip, giving the impression of a frill . 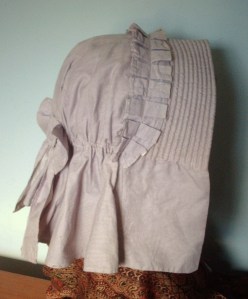 In the example here, there is no further stitched decoration; the remainder of the fabric being gathered to the back, and adorned with a self bow.   The bavolet, which is often attached separately in the traditional bonnets, is here a continuation of the bonnet fabric itself.   The fabric was of cotton, usually printed with sprigged or striped designs, and often mauve in colour.   There is an example in the Quilt Museum & Gallery at York dated somewhere in the period 1900 to 1925.

This style is believed to have originated in the town of Staithes, near Whitby, on the coast of North Yorkshire.   It was once one of the largest fishing ports in the north of England.   These bonnets were worn by the fishermen’s wives, and the thickness of the cording and the frill served to cushion the weight of the boxes of fish, frequently carried on the head.   The town of Whitby, and its surrounding area was extensively recorded in fascinating sepia photographs by Frank (Francis) Meadow Sutcliffe, who was born in 1853, and died in 1941.   The pictures were taken between 1875 and 1910,and there are many figures wearing staithes bonnets to be seen among them.   The TV programme Countryfile shown in September 2013, discovered the last known maker of staithes bonnets….it is not known if she is still making them.

These bonnets were also worn as part of traditional dress by barge women, living on their narrow boats, particularly on the Kennet and Avon Canal. They were items of everyday wear.

It would be fascinating to know when they died out.   Does anyone have any old photographs  of life on the canals that might give a clue ?   Or even better, has anyone got granny/great granny’s bonnet in their posession that I might examine and photograph ?   Any dates, names  and places make it all come alive.

There is yet another form of ‘sunbonnet’ of totally different construction.   For want of a better description I call them ‘pocketed’.   They serve the same function…that of keeping the sun off the face and neck, but instead of all the cording and frills, they are much plainer; the stiffening being formed by narrow slats of thin wood or thick cardboard tucked into long closely sewn channels.   The fabric at the back of the bonnet is gathered up into a puff, and the bavolet is a    . 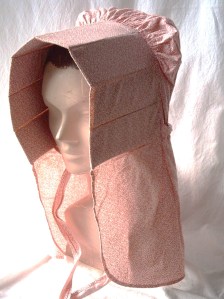 continuation of the crown.   This construction is quite ingenious, as if you undo the rear bow and remove the stiffeners, the whole thing opens out almost flat for easy laundering and ironing.    Interestingly, the fabric, printed with tiny pink sprigs on a white ground,is a different colourway of the same pattern as both the precious almost-worn-out work bonnet shown earlier, and the yellow bonnet in the second picture.   I find that quite amazing…..there must have been huge quantities of that fabric produced and printed…I wonder where  ?

One of my reference books implies that this form of pocketed bonnet was American in style, and there is an excellent illustration of one very similar to a black one I have in the collection in the book ‘Victorian & Edwardian fashions for Women…1840-1919′  by Kristina Harris ,an expert on historical fashions, writing for Schiffer publications in Pennsylvania.   She dates this one to 1850.

So….does my pink one have American connections; and did that tiny sprigged cotton fabric travel the Atlantic ….and if so; in which direction ?

There will be some fascinating snippets of history relating to hats to come….keep watching !