Here is a classic British  trilby.   They are usually made of soft (i.e. unstiffened) rabbit fur felt with a smooth finish; almost always in tones of brown and grey.         Main distinguishing features are a fairly small brim, and moderately tall crown, generally folded inwards in a deep pleat from front to back.   It is the manner in which each individual brim and crown are pulled, pushed, creased, folded and turned that give the hat its own, and its wearer’s unique style, together with the angle at which it is chosen to be worn .

The name TRILBY derives from the stage show ‘Trilby’ which was an adaptation from the book of the same name written in 1889 by Gerald du Maurier.   The heroine wore the hat on stage, and audiences soon began referring to the style as ‘a Trillby’

Lock’s of St James’ describe the trilby as ‘having a somewhat narrow brim, turned down at the front and up at the back.’   Most of the well known hat manufacturers had a trilby or two in their range of styles.

An entirely different impression is given  by the next example, in which the crown has been double-folded into a circle in what is known as the ‘pork-pie’ effect.   It was often worn tipped back on the head in a somewhat racy way; beloved by showbiz stars like Frank Sinatra for example.    It is easy to imagine that wry grin beneath a hat like this. 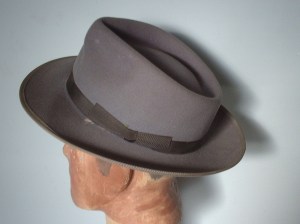 Different again is this somewhat smaller version.   Worn at a rakish angle, it is adorned around the crown and under the brim with snakeskin trim.

Trilbies made in France and the USA usually have very small brims, and are often smaller over all, giving quite a different appearance.

The style of the trilby is so evocative of its  wearers….particularly those engaged in horseracing and journalism.    This may have something to do with the hat’s ability to stay put in windy situations .   Actor Tony Hancock frequently wore a suede trilby, and it was often made in other materials such as hessian and straw.   Its peak popularity was in the 1950’s and 1960’s, since when like most other hats, it has become worn much less.

SIMILAR to the trilby, but somewhat larger overall is the FEDORA.  Again made of felt, it is much more of a statement hat and is enjoying some popularity at the moment, frequently in bright colours. 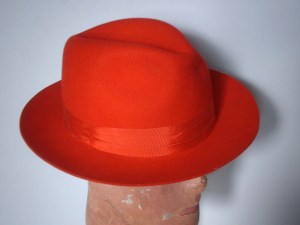 The fedora generally has a wider brim than the trilby, and is worn with the crown deeply indented and the brim completely flat.   The style is named in a Sears Roebuck catalogue of 1902 in the USA, so has been around a long time.

An even earlier felt hat , popular with men in the western USA in the mid nineteenth century was the WIDEAWAKE….a black felt hat with a big stiff brim, made of smooth felt.   Legend has it that this gave rise to its name wideawake….no nap   !!!