MYSTERY SOLVEDThe beautiful piece of ethnic embroidery shown in the page ‘a mystery piece…from where?’  has been identified I am pleased to say.   Intrigued by the article, my computer teacher made her own search, and has come up with the answer. 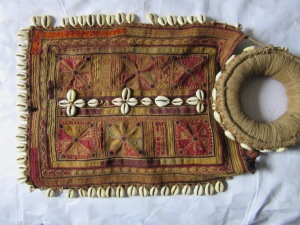 It is a traditional piece from the originally nomadic tribe in  northern India called the BANJARA, and was probably made in the early twentieth century, using vegetable dyes.     Settlement of the people has meant that these tribal pieces have lost their relevance, and they are often sold to traders who sell them on to the West.  This piece of headcovering is known as a ‘gala’, which is usually of cotton, completely handspun and woven, then covered completely in incredibly close chainstitch embroidery.  The motifs seem to be traditional…they appear on other pieces, as does the fairly random use of coloured thread .

A couple of great new (old) photographs have come my way.

The first appears in the new piece  ‘Felt hats 3.. the Homburg’   showing the then Prince of Wales in his new-style hat.

The second, shown below, is an Edwardian photograph on a glass negative, five inches by four and a quarter….known in the trade as a ‘quarter plate’.   Other regular sizes were   ‘half plate'( six and a half by four and three quarters), ‘whole plate’ (eight  and a half by six and a half), and  ‘ten eight’.   This is inches we are talking about here.   Centimetres were never in the frame !   Printing paper came in these sizes, and much larger as well…12×10, 15×12 and 20x 16 were all sizes stocked by the average commercial darkroom.   The larger size was  always quoted first !   In another life, I was a photographic retoucher, long before the computer was invented, and when I first started we still worked occasionally on glass negatives !    Flexible negatives made of a light sensitive emulsion laid on a stiff gelatin base came next.   These then had to be ‘printed’ to get a positive image.  Photoshop and the like could not even be imagined back in the late 1950’s.

Three Edwardian gents, from a glass neg bought at Ardingly Antiques fair in 2015. £2 !!

Not a very good reproduction of it, but the ‘billycock’ bowler and loud check jacket are so splendid I can’t resist  showing it to you.   The other two are wearing boaters, and all three seem to be smartly dressed…I wonder what the occasion was ?    I should think the date is about 1910.

FOR OVER 50 YEARS, Himself and I have collected hats and headgear.   The collection encompasses  ‘anything that anyone has ever worn on their head, for any reason whatsoever’.    The oldest item is a fine silk calash bonnet from around 1775, the newest , a hat made of modern materials at the beginning of the 2000’s.   And everything in between !

In the pages that follow, I want to show you some of the amazing variety of headgear, and tell you some of their history, and some fascinating personal stories.   Go to the ‘INTRODUCTION’, then  ‘SOME ITEMS FROM the COLLECTION’ to see a fraction of this diversity, and then follow some of the styles and materials in the menu.